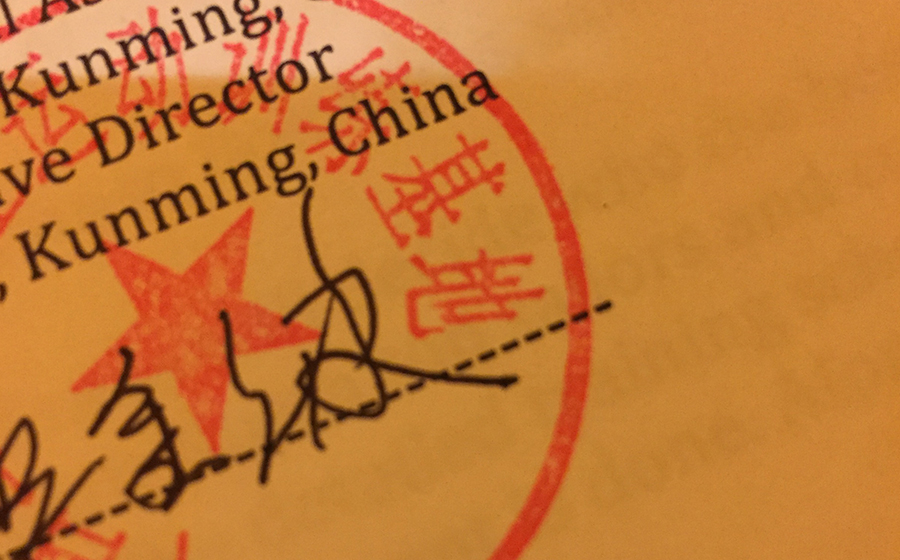 Via a partner I got the a request for a training program: ‘Maybe it’s something for you?’. At first I thought it was an odd request: a 6-month training stage for 58 young athletes from a training base of the Chinese Yachting Association in Kunming and I let it pass for a few days. My second thought was: I can’t let it pass just because it sounds like an odd project, it is China and they do projects like this in other sports already! I would feel foolish if I didn’t even try and see someone else running the project in a few months. Well, foolish I did feel for a while after I came back from signing the contract all the way in China: it turned out to be a scam.

Of course I’ve doubted whether or not I should share this story. But everyone agrees with me: I’ve been cautious from the beginning, I only took a calculate entrepreneurial risk and went for an opportunity that would have had a great spin-off for the youth program I’m setting-up right now and most of all: they didn’t earn any money on me. Let’s all share the word to prevent organisations in our precious sport to lose money on some idiots in China. And be aware: the most people I’ve met who ended up in the same situation are from architectural projects. Now I have proof they are acting in the sports world too, at least in golf, volleyball and sailing.

I responded to the request with more questions to get a better idea of the expectations and to be able to make a fitting quote. After a few emails back and forth I set up a basic plan: half of the training time in the Netherlands, half of the time in Lisbon because of winter time here in Holland.

The first quote was sent in the first or second week of May. More email conversations followed and adjustments have been made towards a second quote: they were interested and as the project had to start in a few Months we had to move quickly. In this stage I contacted partners as I was moving forward to the contract stage: for the boats, housing, sea survival courses, a junior project manager for Holland and Portugal and a head coach from Portugal. I got everyone on standby and told them: ‘It is looking good but even a signed contract isn’t the point I’m going to contract you, that will be when I got the first down payment from them.’

I’ve read a lot about what to watch out for when doing business with China and payment pops up in each article. From the beginning I told that to the Chinese organisation: ‘your payment is leading and we can’t start within 5 weeks after the transfer’. They responded that they will make sure the advance payment would proceed quickly: ‘it’s a government fund which is already guaranteed’.

Sounds great don’t you agree? So they wanted me to come to China to sign the contract. I agreed to a visit if they would pay for my travel expenses at front and that the goal of the visit is to actualy sign the contract. When they said they couldn’t pay the travel expenses at front as the fund was only being released when the contract was signed, I doubted for a while. But again: I would kick myself if I’d let a great project go because I was so stubborn about when the payment was being done for the travel expenses. When they said I’m the only party still running for the project and the budget is approved I booked the flights and hotel for 2 persons: I got an advisor willing to join me, someone who is familiar with the Chinese culture, lived and worked there for over 10 years and speaks a little Chinese, I was well prepared.

Visa application done and ready to go. Packed with two copies of the contract I was heading towards Kunming, China!

We got picked up from the airport by my contact person and a girl who spoke English and would be translating: she studied English at the university in Kunming (yes, they all do the same in this business, now I know). The driver and my contact person didn’t speak a word English which I knew already from an attempted phone call. Fine atmosphere: ‘you have golden hair’ ‘we thought you were men’ etc. We were dropped at the hotel as I asked for as I didn’t want to go into a meeting after 24hours travel and would meet the next day at 10am.

To make sure we didn’t fall asleep and got jet-legged we went to one of the temples in the city: wow that was impressive! My advisor works in the travel industry and was able to tell a lot about the culture and so I felt like a tourist! Luckily I didn’t stay in the hotel for 3 days but actually experienced a lot of the Chinese culture, food and the area! Glad to have my private guide as on my own it would have been difficult as foreign tourism isn’t common and hardly anyone speaks English.

In the morning my contact person arrived at the hotel: let’s sit down here at the hotel and go through the contract. I expected to go to the training base and the girl wasn’t there even though we had been really clear that the person I brought wasn’t a translator. The girl was called and arrived an hour later. The meeting went solely on the payment: it takes time as at least 4 parties needed to approve. Fine, we’ll postpone the start of the program and a date was set for both the payment date and the starting date. So far so good. Then they asked me to pay part of the commission charge explained as the costs of the difference of the currency and the handling fee of the bank. I said no: ‘you’re going to do business with a European organisation, this is your responsibility’. Not the answer they were hoping for, but we got the solution. We added the amount to the project management fee, so it seemed like I would pay for it, but it was actually hidden in the project so the people who controls the fund wouldn’t notice. All good. During the afternoon I’d changed the budget, the payment schedule and the contract that we would sign the next day.

The next morning the driver arrived again. We stayed in the city though while I was so curious about their facilities! But hey, the Dutch federation is also located nowhere near water and I knew they handled projects for different sports and that there was a bureau of sports involved in the project.

The executive director was there and also the girl. After some chitchat and Chinese tea we signed (stamped like they do in China) the contracts. We have a deal and everyone was looking forward to this cooperation. A lunch was scheduled and in the meantime my contact person and the girl took us for a walk in the park. The lunch was at a nice place but I was a little anxious: what do I have to eat? Well most of it was just fine except for some greasy meet. Further like my advisor already told me there was the beer: in China you can’t do business without drinking lots of bear. Not just sipping, you need to drink your glass at once. Well the director said early in the lunch about this tradition but that because we’re women he would refrain himself.

The lunch itself was a little awkward as it seemed they didn’t really wanted to be there: it was a public holiday that day. We’d already set a deadline because of the earlier flight of my advisor so we said goodbye and got to the hotel on time.

On Monday when I was back in Holland we contacted again through email. I’d sent the invoice so they could start the payment process. Then I got the email with their bank account details with the request to transfer the commission charge we’d agreed on. First thought was a miscommunication: we’d never discussed that this had to be paid at front as I would have never agreed to that. So I told them they could either deduct it from their first payment or that I would transfer it as soon as I got their first payment. Letting me transfer money first isn’t the way we are going to do business.

The emails got unpleasant from then and I got suspicious. With the business cards I had now we tried again trough one of my partners to check their credibility and got a contact at the headquarters of the Chinese federation. It didn’t work out the first time but now it did: The Chinese Yachting Association didn’t know these names and no-one in the Kunming area has the authority to use their logo. ‘Well that’s just great, I’ve been scammed’.

The first week it was a mix of being mad: why so much hassle for a just a small amount of money?! Of course it’s about a year’s wage in China, but still. Then you get to forums and you hear from the housing partner that they’ve immediately contacted someone who had a similar request but for golfers: this is a regular business specifically in the Kunming area and I have been lucky when I read the other stories as I stood firm with the decisions I’d made.

But most of all it was disappointment: I was looking forward to running this 6-month program so much! A great opportunity to show the world what I can do, get some of the best coaches involved and offer them an amazing job opportunity, build a buffer for the Keelboat Academy so it’s easier to start a program like the Keelboat Youth Program and last but not least: working closely together with two partners that are supporting me big time and finally bringing it together for a big bang. It was going to be a win-win for everyone involved. Everyone was on stand-by, ready to go!

I’m getting out of this experience with my head up high: not only have I learned a lot from the whole preparation I also got huge support from all my partners: overwhelming to know how many people support what I do!

Please spread the word as they’re obviously aiming for the sports industry, not only in sailing. Contact me if you have more questions of if you got a similar request.

Trackback from your site.

Gybeset has stopped it's activities: Fettje got the opportunity to work fulltime for Nautor's Swan.